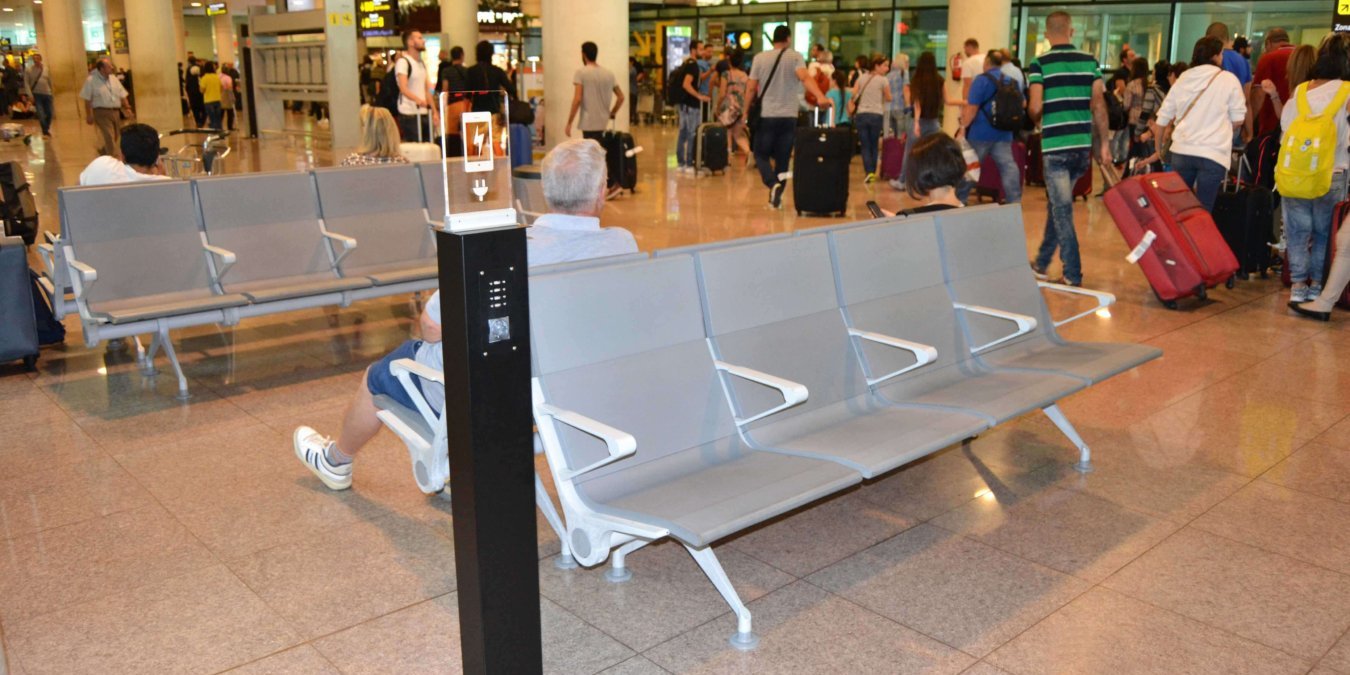 Yupcharge has different devices to charge your cell phone at the airport, such as the Groove phone charging station, ideal for airports because of its small size and high capacity and its 8 USB quick-charging outputs and up to 2 plugs. The Groove user will only need to insert their charging cable into the USB charging slots to receive the charge.

Every time people like to know everything we can, from knowing the reason of breathing to know the most inhospitable countries on the planet, and is that society increasingly like to travel the world, as we are curious beings. According to this statement we are turning places like airports into crowded places.

In addition, people increasingly like to be connected and of course when they are going to make a trip want to share it with their loved ones so that they are aware that everything is going well. This is where the functionality of the phone charging stations for airports comes in, and is that, if we join the need to travel and the need to be connected today, is exactly the result, to make it look less abstract we will illustrate with some assumption.

Marta is a girl who travels to Russia this afternoon, but today she has fallen asleep and has 3 hours left for her flight. She has to get ready, take the suitcase and get to the airport. Finally she arrives but with 1h in advance. When she sees the time, she remembers that she wanted to warn her parents that she is doing well and that she has time to catch the flight, but a cold flashback comes to her mind, she has not charged her cell phone and she has already checked the suitcase where she had the charger. She goes to the departure lounge to ask if there is a charger for her mobile.

Situation A: She doesn’t find any charger, so after 5 hours of nerves, on the plane and waiting, she manages to charge her cell phone in Russia and there warn her parents, who were on the nerves, that she has arrived and that everything is well.

Situation B: In the departure lounge, of course, there is a phone charging station for mobile phones, so she charges her cell phone and makes a call to her parents explaining the situation she has had. Marta then enters the flight and relaxes, enjoying the trip.

Jordi is a businessman; in particular he is a broker who due to his success travels much throughout Europe, although he lives in Barcelona. Today he has many clients to attend but the one that really worries him is the customer that he appointed at 20:00 hours in London. This is a very important customer who has been behind him for months, so this afternoon at 16:00 a flight passes in the Prat and as soon as he arrives to London, he will be able to leave his things at the hotel and then meet the client. It is 15:00 and Jordi just arrived at the airport and got informed that his flight has been postponed 2 hours. He immediately realizes that he has to inform his client. When he looks at his cell phone, his soul falls to his feet. He doesn’t have a battery, so running around he goes to the waiting room and sees if he can find something to charge it.

Situation A: He doesn’t find any charger, so when he arrives to London he charge it in the hotel at 9:00 pm and he finds out that he has a lot of calls from his customer and a message that says, do not bother talking to me again, I don’t think you’re a person with a minimum of seriousness.

Situation B: What he sees is like a mirage, he can see a phone charging station, and after a chat with the customer agree to be at 21:30 for dinner.

These situations are 2 mere assumptions but actually many problems and misunderstandings can be avoided if we find a phone charging station at the airport, so don’t wait and charge stories at your airport.

Yup Charge Chile is a company that bets on entrepreneurship
29 July, 2020

With the Soleo at the Corona Festival
29 July, 2020
Buscar
Últimas post